Bahman Panahi was born in Iran in 1967. Youngest son of a large artistic and cultivated family he was born into the milieu of the arts and came into contact with music, painting, theater and calligraphy through the work of his brothers.

From these arts he chose music and calligraphy for himself. In his opinion the former stands for the Iranian history, its culture and its civilization, the latter gives a spontaneous image of the Iranian creativity and its taste.  His constant preoccupation is the relation between these two artistic domains.

He has obtained the Master certificate from the “Institute of Calligraphers of Iran” under great masters of calligraphy: "Amirkhany , Foradi and Kaboli" and started  teaching in different cultural, artistic and academic centers from a very young age.

In parallel he learned to play the “Tar” and “Setar” and deepened his musical knowledge with great masters of Persian classical music like Houshang Zarif, Mohamad Reza Lotfi, Ataolah Zahed Shirazi.

Bahman Panahi graduated from the Faculty of Fine Arts at Tehran University and continued his studies at Ecole des Beaux-arts, in Valanciennes and then Sorbonne in France toward a Ph.D. in visual arts.

Since 1990 he has been involved with teaching courses, lectures, workshops, conferences, concerts and exhibitions in five continents. In addition, he has been invited as a guest professor and distinguished artist to noted institutions such as Harvard University and Northeastern University in Boston, Science Po. in Paris and other institutions.

Bahman Panahi lives in Paris since 2002 and is actively engaged in his artwork globally. 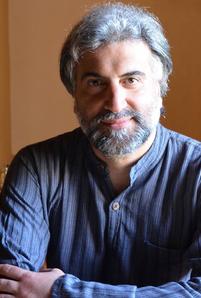